Affordable housing advocates stood outside the Statehouse in the 27-degree weather Thursday to urge lawmakers to do more to fight homelessness.

More than 100 supporters, nearly a dozen lawmakers and members of Gov. Phil Scott’s administration attended the annual event organized by the Vermont Coalition to End Homelessness and the Vermont Affordable Housing Coalition. 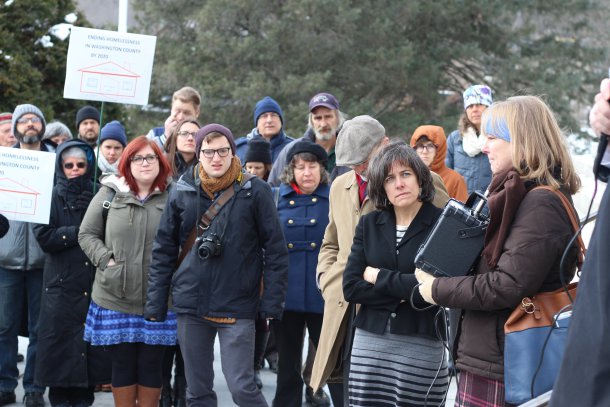 The groups say homelessness in Vermont is on its way down, based on an annual point-in-time report, which measures how many people in Vermont are homeless on a given day of the year.

“While 1,100 people is an improvement, one is still too many, and I hope to work with all of you to move forward,” House Speaker Mitzi Johnson, D-Grand Isle, told the advocates.

Johnson highlighted her move Wednesday to expand the House Committee on General, Housing and Military Affairs from eight members to 11. She said housing is “a big problem to solve, and we’re taking good steps.”

Lt. Gov. David Zuckerman said the role of state government is to make sure everybody has the conditions to thrive and succeed. “And as we all know, if people don’t have housing, that’s a pretty fundamental condition,” he said.

Zuckerman encouraged Vermonters to continue advocating on the issue. He added: “It is exciting to read about the progress we have been making, but it is so sad that every year we come back and we still don’t have this issue resolved.”

Al Gobeille, the new secretary of the Agency of Human Services, attended on behalf of Gov. Phil Scott. Gobeille said he is entering the job “with an outstretched hand and an open mind” to help continue progress in the fight against homelessness.

“I don’t come in as the secretary with all the answers,” he told the advocates. “I don’t claim even to have all the questions. But I’m here to work with all of you.”